After a break over Christmas I've been back on the on the painting trail for a couple of weeks now... and at last some results. I finished off this first unit of Isle-men for Somerled's army this morning. These guys are going to be Somerled's elite Fianna (hence the armour). I've used miniatures from Gripping beast, Newline Design, Crusader, Heroes of the Dark Ages and a plastic Wargames Factory viking (the guy missing his head)

Now I'm not sure, in reality, there would be much difference between Somerled's Isle-men and The Norse of Mann but I've tried to give Somerled's troops a more Gaelic look because it's more fun that way.

Next up I'm going to paint up a unit of Gaels from the highlands. 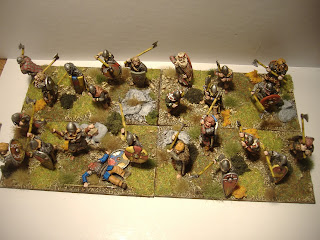 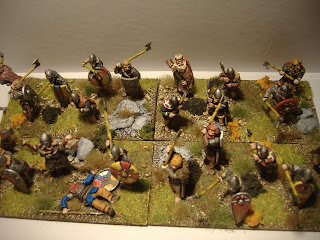 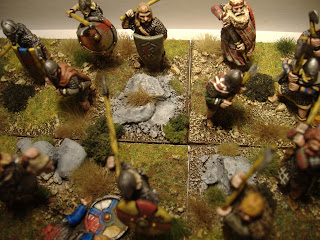 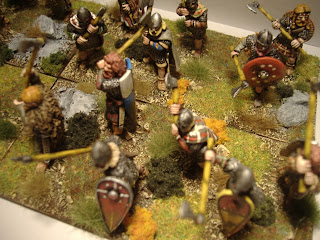 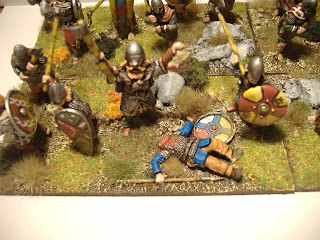 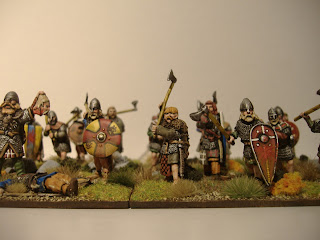 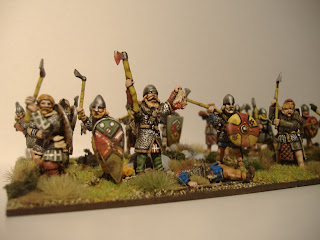 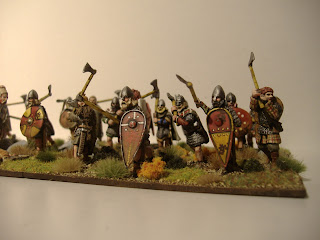 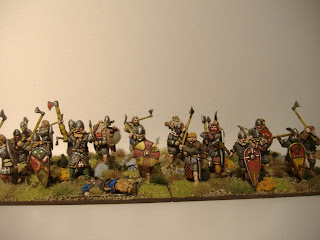 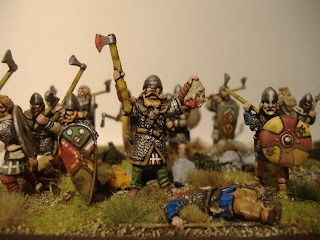 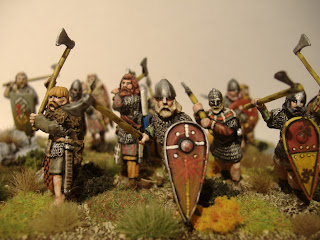 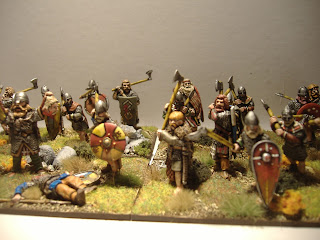 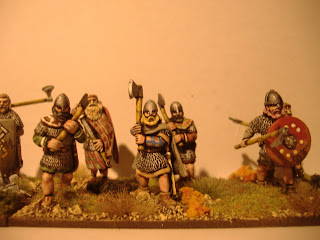 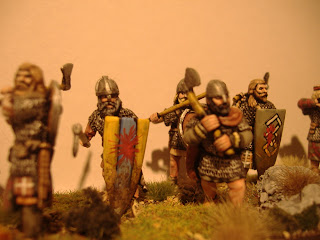 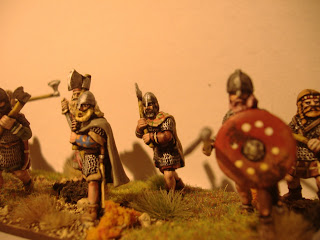 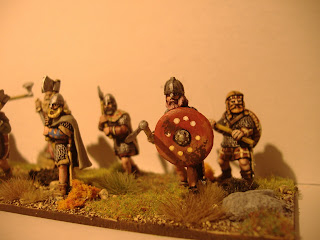 I found this book in my local Oxfam bookshop for the princely sum of £2.49. Published by the ordnance survey in 1973 it is a slim A4 hardback which contains 30 pages or so of brief descriptive text about the makeup of the British Isles pre-1066 (sadly not Ireland). There's information here on the Danelaw and Danish settlements, town organisation, church settlements and fortifications.

The real interest for me lies in the twin pair of huge Ordnance Survey maps in a pocket at the back. These divide Great Britain into north and south and contain a lot of period detail, with sites of historical finds and battles marked, along with towns, fortifications and mints of the era and both their modern and Anglo-Saxon era names. The maps would, I think, be really useful for someone running a dark ages or early feudal wargames campaign in Britain.

From my point of view the text parts on the Norse in Scotland and the section on the Isle of Man were both useful and the map of northern Britain is helpful for placing various places mention in the Somerled book I recently finished.

So I got this book for Christmas (Somerled Hammer of the Norse) and have now finished it. If your interested in this period this book gives a reasonable outline of the politics of the era and of Somerled's raise to Lord of the Isles. Sadly it gives no details on Somerled's main battles.

Generally this book is, in my opinion, more about championing the brave Gaels against the nasty and barbaric Norse than giving a detailed account of Somerled's life. The book comes down firmly in the camp of Somerled as a Gael despite modern DNA testing seeming to suggest Somerled was Norse (or at least partial Norse) and he most certainly had a Norse name.

Quite a lot of the book (about a third) is concerned with the Lordship of the isles after Somerled's death and subjects like Norse longships and the Gaelic language all interesting stuff if not directly useful to my hobby project.

All in all not a bad book (if you can take the authors Gael propaganda with a pinch of salt) and to be honest I haven't find much else out there dealing with Somerled.
Posted by Jon Ward at 14:10 No comments:

Finally got to see the Hobbit tonight. I'm kind of in two minds about this movie really. I think if I'd never read the book I would have really enjoyed the movie (like my son did) but sadly having read the book several times all the little changes (and not so little changes) rather bugged me.

The Dwarfs were ok and I thought Bilbo was pretty much spot on. Radagast on the other hand in his rabbit sledge was just plain stupid. There was also the feeling that their was a lot of padding to make the book fill three movies all in all I'd give the film a 6/10.

So Christmas is over a whole week of over eating, increased alcohol consumption and visits to friends and family is done the Christmas decorations are now down and it's time to make all sorts of hobby resolutions that won't make it past the 1st of February.

I totally failed to get any painting done over the Christmas holidays I did however manage to spend some Christmas money on more white metal and read a book on Somerled I got as a Christmas present. I managed to play a few games of the Dungeon Command boardgame with my son after getting the Goblin and undead expansions for Christmas.

Looking forward to 2013 I plan to carry on with my Somerled project for Hail Caesar. I now have (I will once the arrive in the post) all the miniatures I need to build up Somerled's Gaels I just need to paint and base them all now. After that I hope to put together Godred's Norse Mann forces.  Beyond that I have no plans for this year and knowing how easily I fall prey to the "oohhh shiny" syndrome just finishing the two above armies will be an achievement.