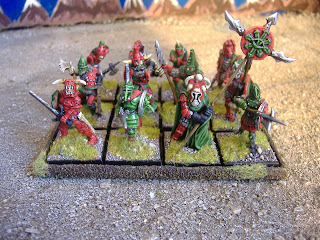 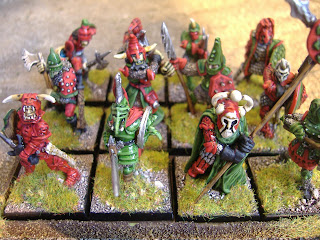 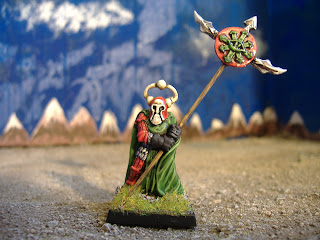 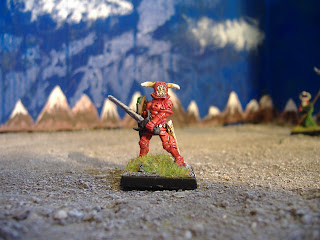 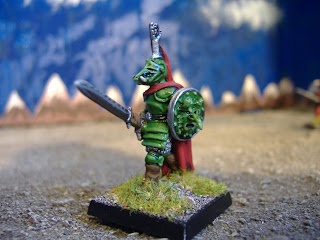 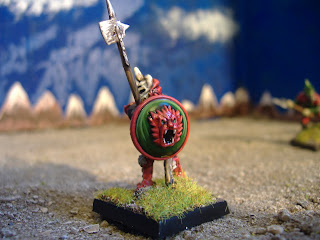 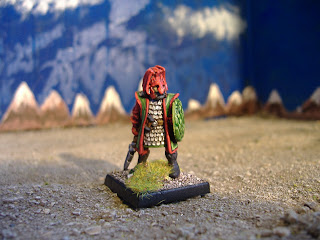 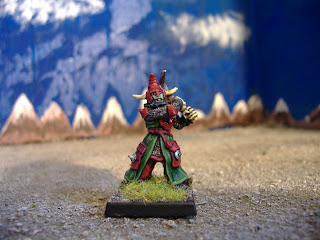 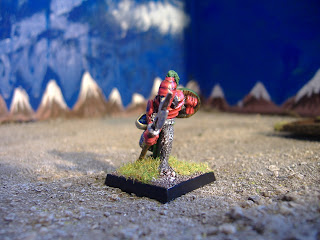 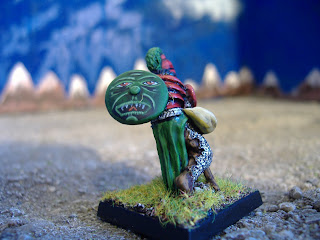 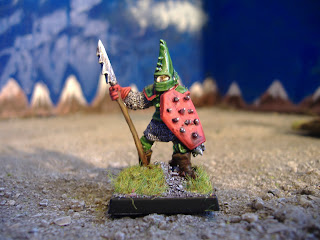 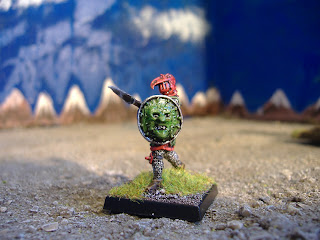 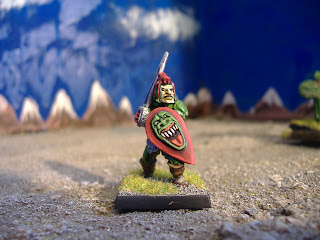 Spring is here which means I find myself under a barrage of spring cleaning jobs from she who must be obeyed. Weekends now seem to be taken up with sorting out the garden, clearing out the garage (and even worse rumours of clearing out the loft) in between children's sporting events and washing thing (bikes,car motor bike).

Anyway between all this I've managed to find some time to paint up some chaos warriors for my WFB army. I decided to go for a chaos undivided army rather than a chosen power but I didn't want to go down the black and silver/gold route favoured for chaos armies these days.
I played around with some colour schemes and decided on this red and green combo which I'll carry over to the rest of the army.

The miniatures are all pre-slotta citadel miniatures chaos warriors circa 1984 (except the guy in the bottom picture who is a very early post slotta circa 1985). There are a few conversions with bits from my bits box, because a) I had some duplicates and b) some of the lead weapons where very bent.

These guys could be warriors or marauders depending on the pts of the army. As warriors this unit weighs in at circa 1000pts for 12 models ............

I've got another 15 or so of these old school warriors as well as a unit of old school beastmen to go with them. Some characters and a few odds and sods to add to the baggage train. I might throw in some Mantic Abyssal Dwarfs as allies to.

Back of beyond - Reds vs Whites

I managed to get down to the club for the first time this year and enjoyed a game of BoB with Jim. Jim's Reds and my Whites dueled it out for six turns but the end of the night saw a draw. Jim's many machine guns caused a lot of casualties to my infantry and cavalry (my cossacks really are useless). While my artillery and armoured train pounded Jim's support assets to dust while leaving his infantry pretty much in tacked.

Still not convinced by the contemptible little armies rules, the inability for most units to move and fire makes offensive action pretty much pointless. I do however like the BoB concept so it may be a case of seeing what other rules would work for BoB

Can you guess what it is yet? 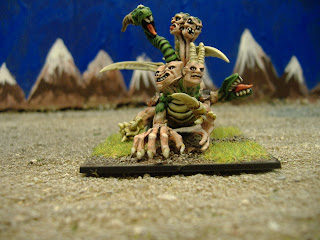 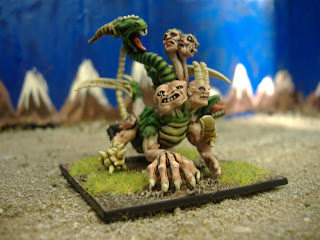 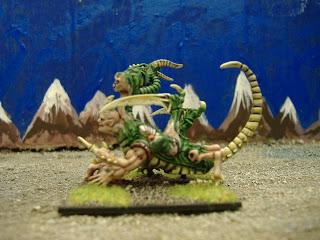 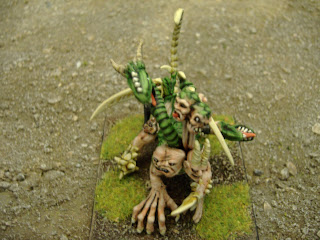 I'm not exactly breaking records on the painting front at the moment. All the usual suspects work, family, etc etc have conspired to cut down my hobby time. I have managed to put together and paint this chaos spawn though.
A long time ago I bought a metal GW chaos spawn model. I didn't really like it and it end up in the bits box were a few pieces were used in other projects and the rest just sat there until last week. I was looking for something else in my bits box when I started finding bits of this model.
One thing lead to another and with a good rummage for other interesting parts I ended up with the thing in the pictures. I rather like it I have to say. It's now going to form the centre piece of a Warhammer chaos army that I've been slowly building up for a while now.
Cheers Jon
Posted by Jon Ward at 14:23 2 comments: 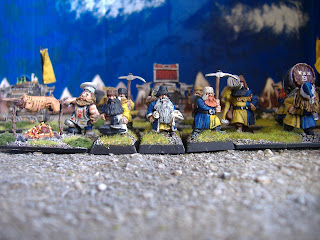 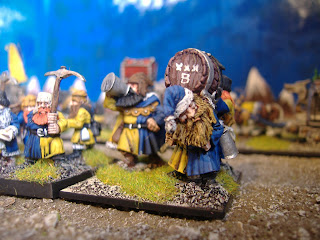 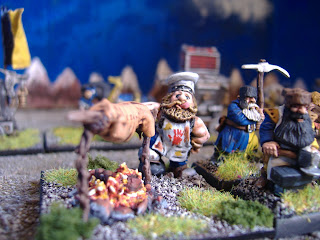 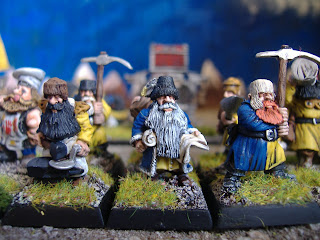 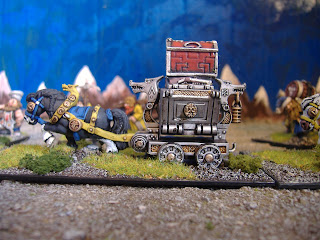 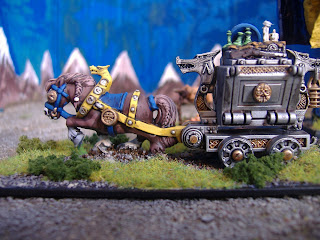 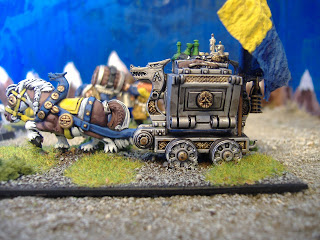 The Baggage train is finally finished for my dwarf army. In WFB 3rd edition most armies can have a baggage train (and in fact require one if they want to field mercenaries). They also play apart in the Mighty Empires campaign I hope to run one day. For each 1000pts spent on the army the baggage requires a wagon and 5 camp followers. The camp followers are armed with improvised weapons and can fight if the baggage encampment is attacked. The idea of doing some non combatant vignettes appealed to me so I'm going to do baggage trains for all my armies.
I've made a baggage train big enough for a 3000pt army although my dwarfs are only 2000pts at the moment. I've cheated slightly and mounted smaller groups of models on 40x40mm bases but I'm going to count them as four figures. If you're really eagle eyed you may notice the baggage train is a dwarf short, hopefully ebay will furnish me with one of those Citadel dwarf villagers miniatures from the 80s soon.
The three wagons are grudge wagons from the skull pass box set picked up on ebay for pennies. The wagons are pretty much as they came. I fiddled with the loads on the tops a bit for some variety and added a couple of flags just to pep them up.
The dwarf chef has been in my bits box for years is from citadel and I think came with the Gob lobber catapult (sadly long gone). The dwarfs with tools are from Ral partha and sold as dwarf engineers they're Bob Olley sculpts and look great as baggage types in my opinion. They must be beardlings though as they're tiny. The three beer swilling dwarfs with the barrel of Bugmans XXX are also Bob Olley sculpts I picked them up on ebay so I have no idea what range they came from. They do show scale creep of at its finest though as these guys are huge.
The dwarf army is so close to being finished now, up to the 2000pts level. At some stage I'll go up to 3000pts but right now I'm sick of painting dwarfs. Which is a problem as I have 10 crossbow dwarfs left that need to be finished but I just can't muster the enthusiasm.........
Jon
Posted by Jon Ward at 00:15 5 comments: 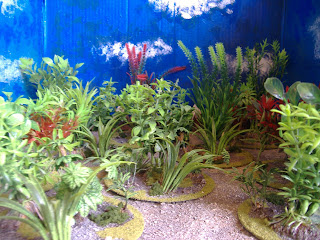 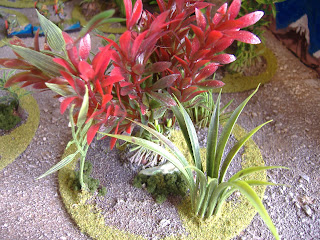 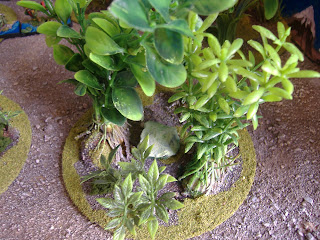 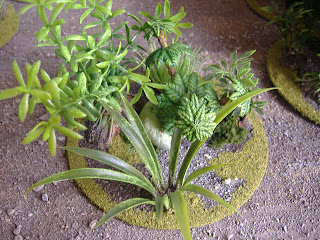 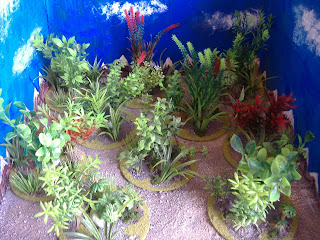 So here are my finished jungle terrain pieces using the plastic aquarium plants I got from the 99p store. I made ten pieces mounted on old CDs (I always collect any old CDs/DVDs I come across). I already had some jungle terrain I bought at a wargames show many years ago that was a bit tired looking and based as individual pieces. I broke the old scenery of their bases and added them to my 99p store pieces to make quite a nice mix of foliage. A bit of sand paint and flock finished off the CDs nicely.

I'm pretty pleased with the results. The only down side is that my 6x4 table rather swallows up the ten pieces I think I really need another ten. Looks like another trip to the 99p store is on the cards.
Jon
Posted by Jon Ward at 12:33 3 comments: 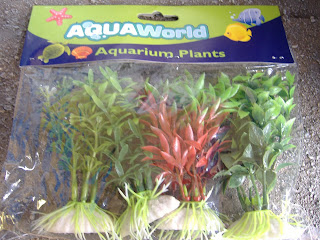 While being dragged around the shops by the wife yesterday (another downside of works overtime ban) I ended up in the local 99p store were I found these plastic aquarium plants. There were lots of different packs ranging from 4 small ,3 medium or 2 large plants on a resin base for a princely 99p a pack (not surprisingly).

I picked up five packs and plan to renovate my existing jungle terrain on to CD bases with these added jungle foliage. It might not be very realistic for really world conflicts but will certainly do for Sci-fi and fantasy games. In particular my jungle loving Slann army will feel much more at home.

Cheers Jon
Posted by Jon Ward at 13:42 No comments: